An aspiring pilot’s expedition into flight, from childhood to college 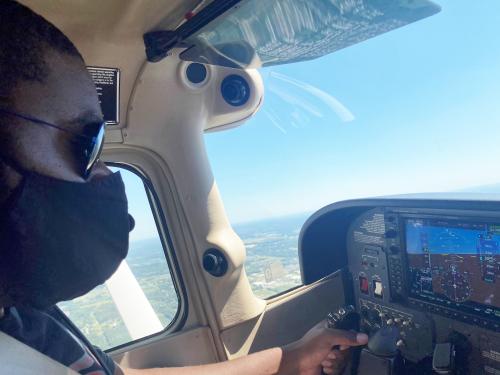 From flying on commercial planes in childhood to pursuing a Professional Pilot Certification through The Ohio State University Center for Aviation Studies (CAS), the stars have aligned for second-year Jordan Griffith-Simmon's journey into aviation.

Griffith-Simmon is majoring in air transportation through the College of Arts and Sciences and serves as the CAS liaison and treasurer for the Ohio State chapter of the Organization of Black Aerospace professionals (OBAP). Griffith-Simmon's initial interest in flying came from his routine flights back and forth between New York and North Carolina as a kid. He was born in the Bronx, but spent a most of his time in North Carolina with his aunt and uncle. Then, during his freshman year of high school, his counselor told him about a youth flying program in which students could earn their private pilot certificates. It was the perfect fit for Griffith-Simmon—he immediately joined, taking his first solo flight in June of 2017 and earning his certificate in October of 2018.

“I grew up flying on commercial jets, so becoming an airline pilot seems like destiny for me, a role that I was born to fit into,” said Griffith-Simmon.

With North Carolina being home to only one university with a professional pilot program, Griffith-Simmon chose to apply to schools across the country. His final decision came down to two options: Delaware State University and, of course, The Ohio State University. Griffith-Simmon was torn—he received full tuition scholarships from both schools, and Delaware State is one of the nation’s historically Black colleges and universities (HBCU). However, the deciding factor in choosing Ohio State became his receipt of the university’s Morrill Prominence Scholarship.

The Morrill Scholarship is offered through the Office of Diversity and Inclusion and is a merit-based scholarship that rewards students who are committed to celebrating cultural diversity and advocating for social justice. 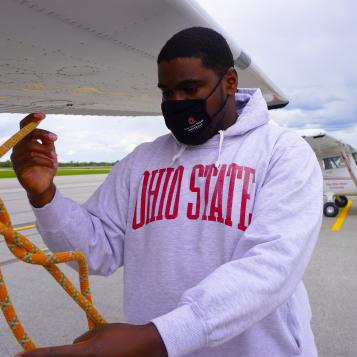 “In addition to having my tuition paid for, I have received many academic and social supports, such as Office of Diversity and Inclusion tutoring, the Bell National Resource Center on the African American Male, Morrill Scholars mixers and so many other supports,” explained Griffith-Simmon.

As he thinks about his future, Griffith-Simmon dreams of becoming an airline pilot. He wants to travel overseas and experience life outside the United States. However, after graduation, he first wants to build flight time through air taxi flying, whether it be soaring through the Alaska wilderness or island-hopping in the Caribbean. According to Griffith-Simmon, these jobs "bring authentic experiences and allow you to build up a strong flight resume, while still having the most fun flying you will ever have.”

When asked why he loves flying, Griffith-Simon said, “I enjoy being able to do something that very few people in the world can do.” His experience through Ohio State’s Center for Aviation Studies has undoubtedly contributed towards his skill and passion for flying, but has also allowed him to be a leader for diversity and inclusion in his field.

In addition to his aviation pursuits, Griffith-Simon also plays for Ohio State’s club football team and was named a first team All American by the National Club Football Association (NCFA) in 2019, when Ohio State won its first NCFA national championship.