The Ohio State University Airport will receive more than $760,000 annually for the next five years through the Infrastructure Investment and Jobs Act. 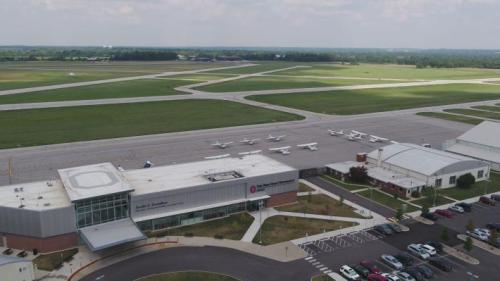 Nearly 100 airports across Ohio will benefit from more than $250 million in funding through the new legislation. Airport Infrastructure grant funds can be used toward projects to improve and replace runways, taxiways and airport-owned towers.

At The Ohio State University Airport, the new funding will enable the completion of overdue renovations and safety improvement projects. According to Stephanie Morgan, executive director of the Air Transportation and Aerospace Campus, it also will help the airport recover from the economic impact of COVID-19 and expand its role as a catalyst for economic growth.

“We appreciate the efforts of Congresswoman Joyce Beatty and U.S. Senators Rob Portman and Sherrod Brown in spearheading this important legislation,” said Morgan. “The additional support will help ensure The Ohio State University Airport remains one of the best general aviation reliever airports in the National Plan of Integrated Airport Systems, and help build a safer and more sustainable airport while creating jobs and connecting Columbus to the region.”

Operated by the College of Engineering, The Ohio State University Airport is home to interdisciplinary education and research. The airport also supports the central Ohio community by offering engaging outreach opportunities, as well as access to the global marketplace.

“The Bipartisan Infrastructure Law has given us a once-in-a-generation opportunity to build safer and more sustainable airports that connect individuals to jobs and communities to the world,” said U.S. Transportation Secretary Pete Buttigieg. “With this new funding, urban, regional and rural airports across the country now can get to work on projects that have waited for years, modernizing their infrastructure and building a better America.”